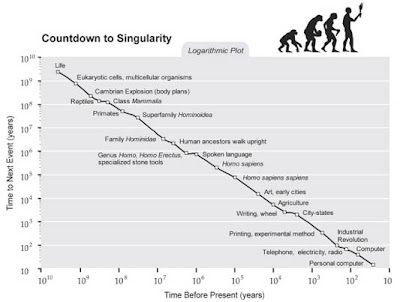 Countdown to the Technological Singularity

Ray Kurzweil: The Six Epochs of Technology Evolution Ray Kurzweil has postulated, and views evolution as, six epochs of technology. Each epoch defines how information is stored and processed and are stages in the evolution of information. These epochs are:
● Epoch 1 Physics and Chemistry: Information in atomic structures
● Epoch 2 Biology: Information in DNA
● Epoch 3 Brains: Information in neural patterns
● Epoch 4 Technology: Information in hardware and software designs
● Epoch 5 Merger of Technology and Human Intelligence: The methods of biology (including human intelligence) are integrated into the (exponentially expanding) human technology base
● Epoch 6 The Universe Wakes Up: Patterns of matter and energy in the Universe become saturated with intelligent processes and knowledge

Ray Kurzweil We are now in late Epoch 4. Ray Kurzweil states, "This is the advanced state of Epoch 4, where humans are creating technology and putting our knowledge base in that technology. Epoch 5 is when we are going to merge with that non-biological intelligence that we are creating. To do that, we need to create intelligence that is equal to us and we need to create the nanotechnology to put it inside our bodies and brains. That's where we're headed, that will be Epoch 5. Then Epoch 6 is when we go out into the rest of the Universe." In Epoch 5 the Law of Accelerating Returns, that information technology grows exponentially, is utilized to maximum advantage and the Technological Singularity occurs.

The Six Epochs from The Singularity is Near The Singularity is real. By virtue of second law of thermodynamics it is inevitable. In the absence of Truth it creates fear. In thermodynamics it emerged as heat death of the universe. In General Relativity it emerged as the point to which all the matter collapses in time to take new birth [Big bang]. In modern world it is the black hole into which all the information collapses. From the point of biology and evolutionist it becomes the point where machines grow to beat the potentiality of Human mind and makes him slave. All this potentially fearful evolution emerges, from our basic vision and assumption that universe is material. These fears vanish and hope emerges the moment you switch your fundamental assumption that universe is material and think it as living conscious and intelligent being. Then all the conceptual thinking of singularity becomes valid as Living Science, centered on one Super Soul and Mind that Creates and controls everything. Our present Evolution of the universe becomes a journey of the Creator in time to awaken human consciousness and intelligence to meet the Mind of God or the Creator, such that we humans beat death and gain life. We are approaching the gate of singularity and Truth is the Key to open the door to Golden Age or Kingdom of God. We are in the edge of death and destruction, the more we delay comprehending the Truth greater will be the destruction. Universe needs to be understood as Consciousness and intelligence [Information] unfolding and enfolding eternally sustaining the universe in time. 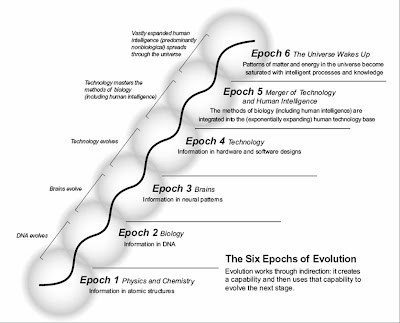 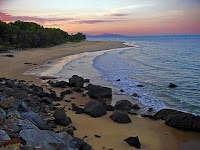 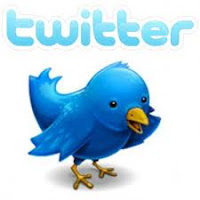 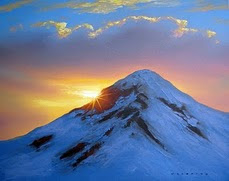